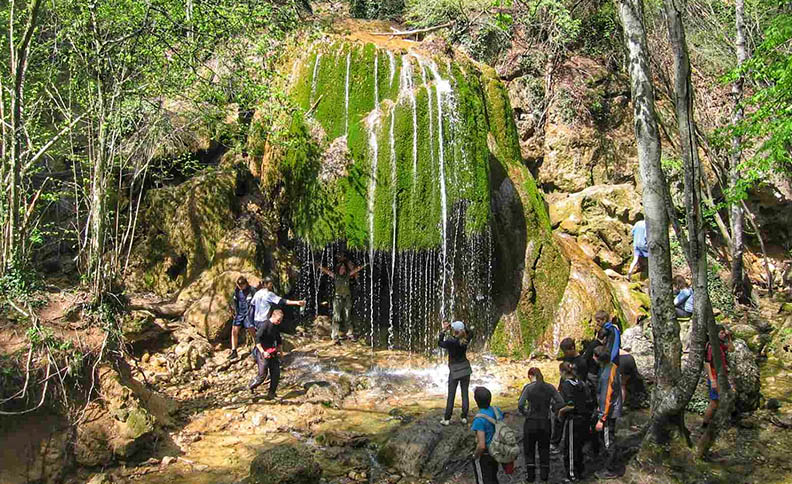 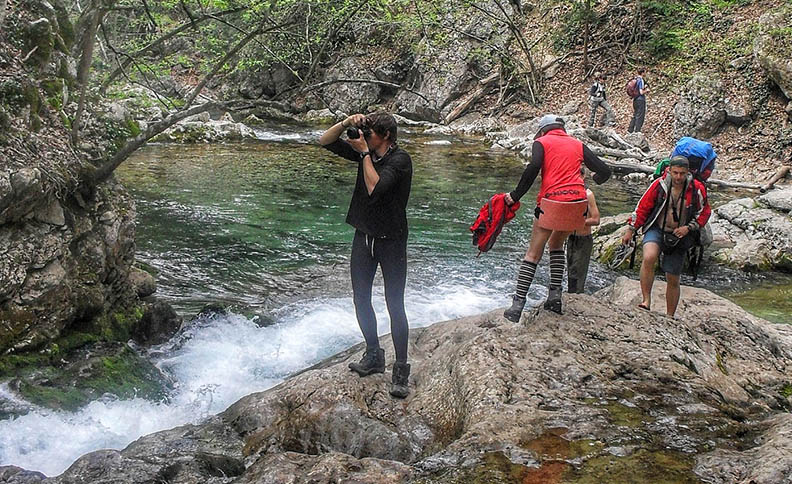 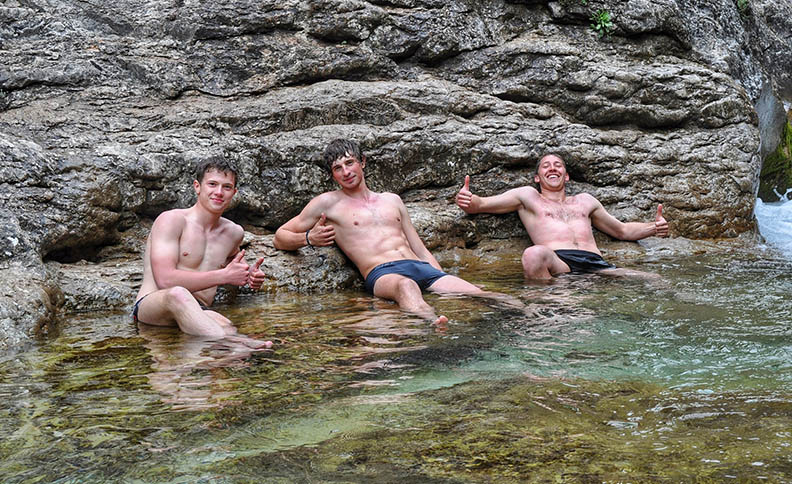 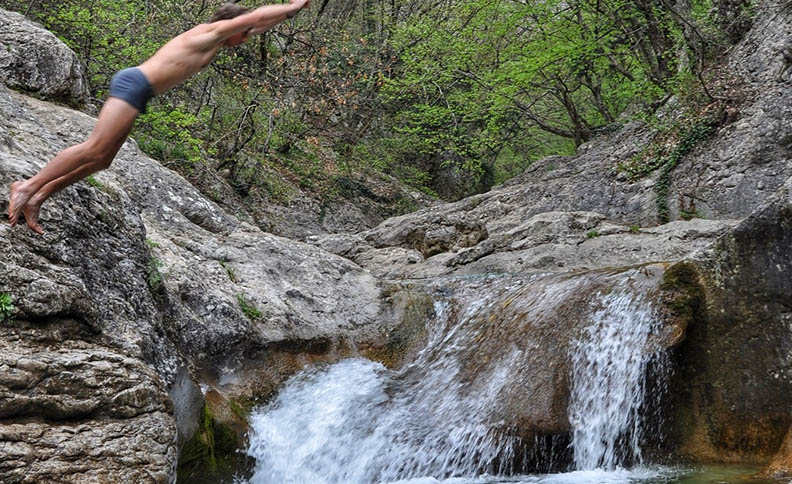 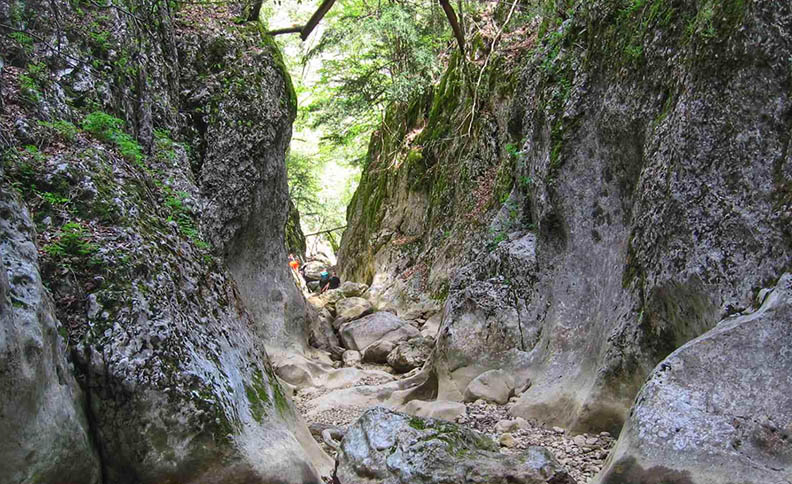 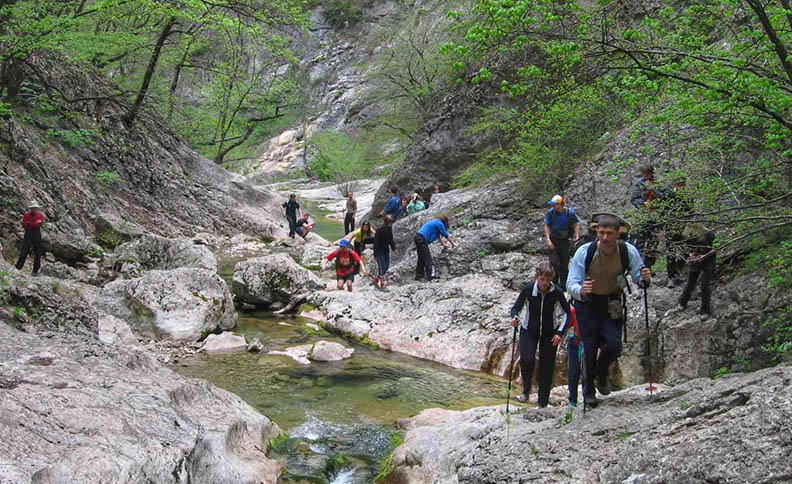 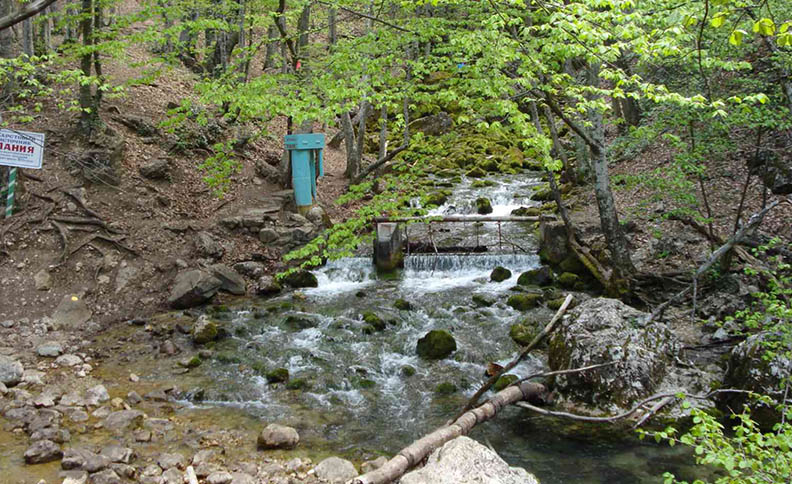 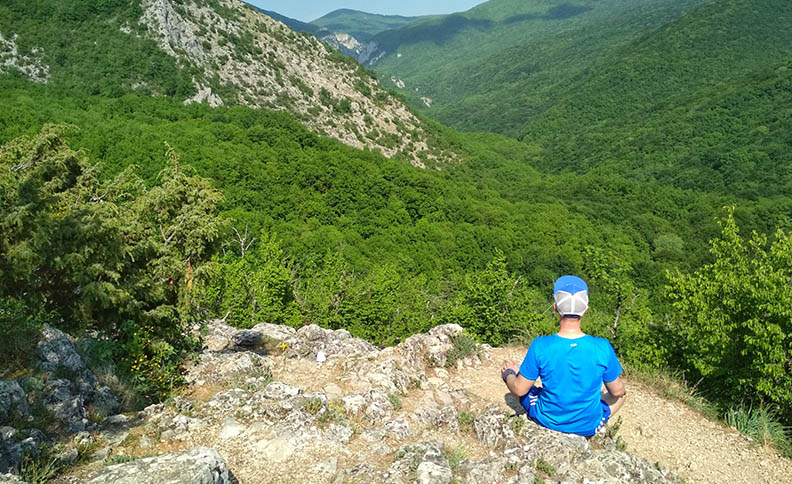 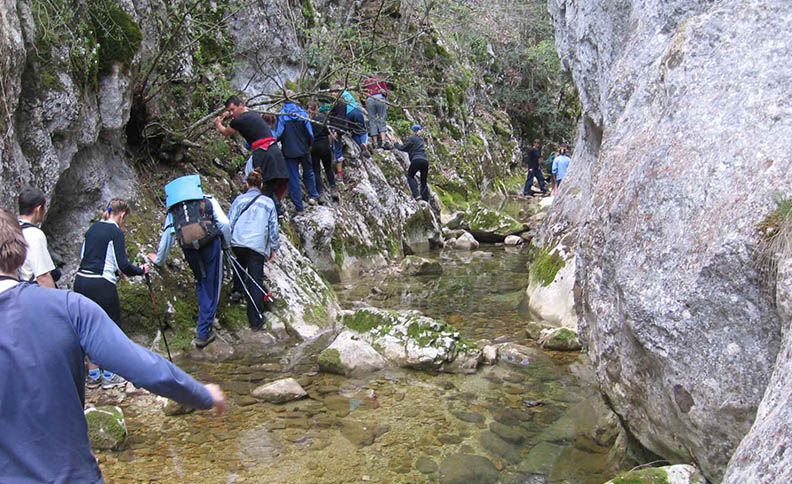 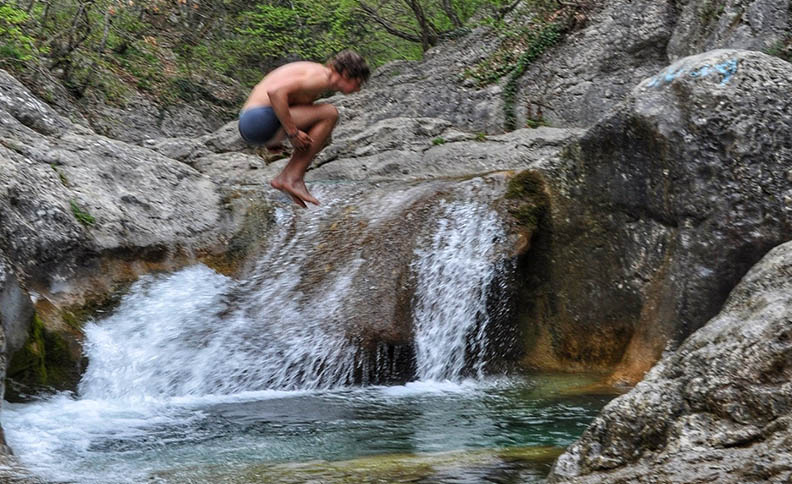 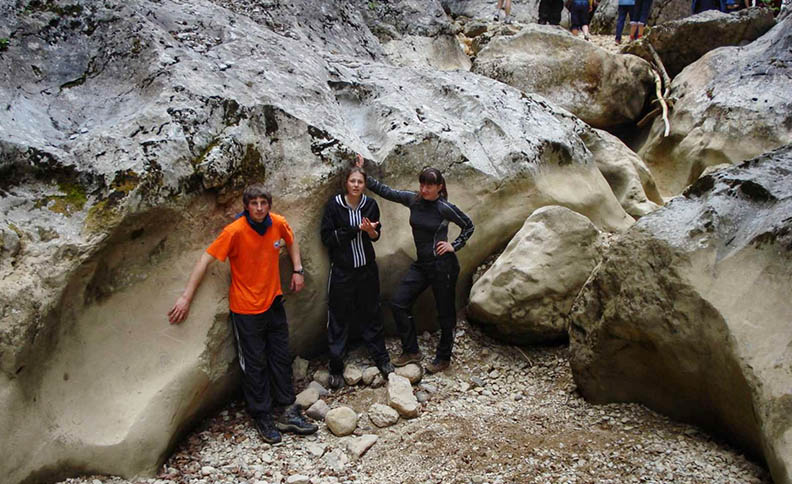 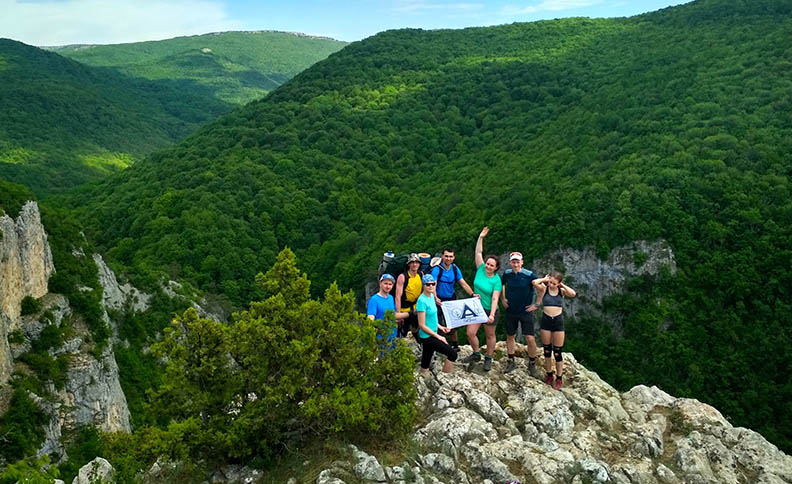 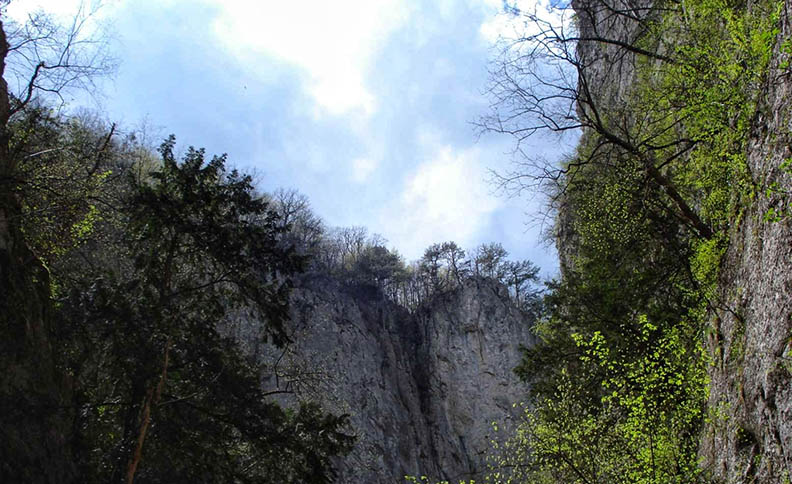 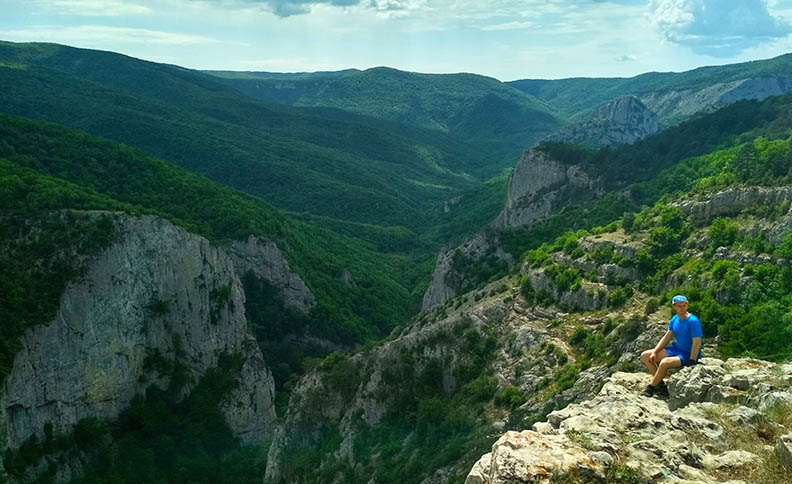 In the mountainous part of the Crimean Peninsula is the wildest and most majestic gorge – the Grand Canyon of the Crimea. It occupies one of the first places among walking tourist routes. Here you can admire the stunning scenery, mountain rivers, lakes, waterfalls, walk on a suspension bridge, and swim in the “fountain of youth”.

The Grand canyon of Crimea is a gorge with a length of 3.5 km. The height of the steep walls in some places exceeds the mark of 300 meters. The width of the canyon is from 370 to 3 meters. The gorge is located in a fault between two mountain ranges – AI-Petri and Boyko. Along the bottom of the canyon flows a mountain river – Auzun-Uzen, which a little further forms the Kokkozka river.

The canyon was formed more than 2 million years ago on the site of a tectonic crack. The name “Grand Canyon” appeared thanks to Professor I. I. Puzanov. In 1925, he first made a description of geographical features located in the canyon.

The entrance to the canyon begins with a wooden bridge over the Kokkozka river. Behind the bridge there is an information Board with a map and a brief description of the Grand Canyon. We follow the path along the shore. Already here you can see river pools and small waterfalls. We pass the Yew waterfall, so named because of the huge berry yew growing nearby. Along the way, you can find specially equipped bridges and ladders on the trail. We reach the “Blue lake”. The water here is clean, clear and cold enough. Then we follow the path along the rocky shore. We pass a bridge of logs and get to the “source of Pania”. This is one of the largest springs in Crimea.

After the source, the rock section begins. The riverbed here is in the form of a solid stone, covered with small baths. In the dry season, you can move directly along the riverbed. Here we are already beginning to ascend the sheer wall.

Then the main attraction of the Grand canyon – the fountain of youth-appears on the route. This is a natural pool with very clean and cool water. Here you can swim, relax and recharge your energy for the entire upcoming route.

Leaving the fountain of youth, the official trail ends. You can only go further during the dry summer period. We go around the bath on the rocks of the right Bank and continue along the riverbed. We reach the Yin-Yang waterfall. After 20-30 minutes of walking, the water in the riverbed ends, and the rocks approach closer each other. Here begins the narrowest section of the canyon. From here on you must be little physically fit and flexible. Sometimes you will have to climb over large boulders and rock ledges.

After a while, the rock walls are replaced by forest slopes and the canyon turns into a regular ravine. Here you can go up the right slope and get to the marked path. It rises to the observation decks of the Grand Canyon. It offers stunning views. Here you can walk along the suspension bridge. Moving further along the path, you can look into the “Cow groth”. Then the path goes into the forest, deviating from the edge of the canyon. The last attraction will be the “Post oak”. From there, follow the path down to the wooden bridge, back to the spot where the journey began.

Not far from the entrance to the Grand canyon, on the other side of the highway, there are several other attractions. To see them, you need to walk 900 meters upstream of the Sary-Uzen river. This river flows along the bottom of the Small canyon. A well-equipped trail will lead you to the Silver stream waterfall. Here you can see how the thinnest water threads run down the bright emerald moss. And just above the waterfall, 200 meters away, there is another attraction – Yusupovsky pond. This artificial reservoir was specially built for trout breeding.

The length of this route will be about 7 kilometers. You must take water and snacks with you, as well as put on comfortable shoes. Visiting the Grand canyon is free of charge.

If you want to get closer to nature and see beautiful panoramas with your own eyes, you should definitely go to this picturesque corner in the mountains of Crimea!

Visit the grand locations like Grand Canyon of Crimea and loads more that Russia has to offer!
Contact us @ Russian Info Center to Book  Russia Tour
Choose from flights ex Delhi, Mumbai & Calcutta