How to get to Russia from India 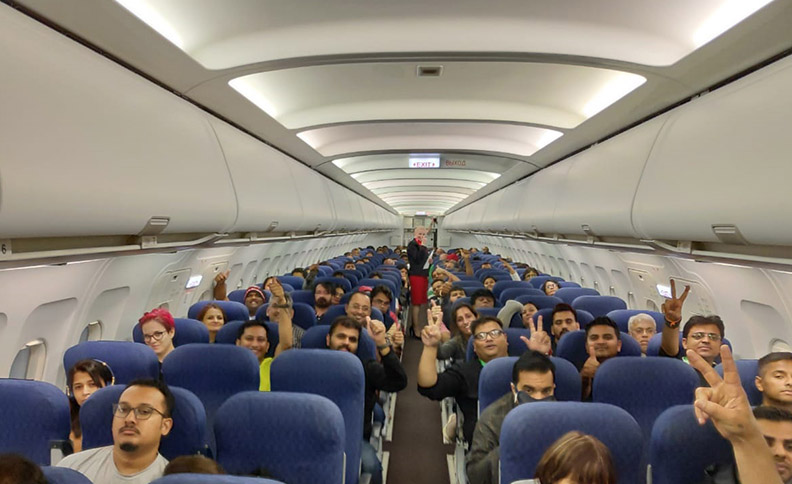 To Russia By Air:

Russia has 270 airports in total, out of which many do not all having international flight arrival capability. The main airports mostly used by tourists are Moscow, St. Petersburg, Kazan, Sochi, Ekaterinburg, Irkutsk, Vladivostok which are in the regions that have good tourist potential and great opportunities for Indians to travel to, with Indian meals and Indian hospitality via the Indian-Friendly program.

Direct Flights from India to Russia:

Flights with stop over from India to Russia:

To Russia By Road:

Russia has extensive road networks and most of them are very well maintained. The roads generally frequented by visitors and tourist connect the major sights and cites and development areas and are safe and comfortable to tour on. Fuel rates in Russia are quite on the lower side compared to Western Europe. Quite many of Europeans and Indians tour Russia on well designed and maintained Auto tours involving cars, 4×4, motorcycles, bicycles, right up to walking tours in cities.

Russia connected to all its European neighbor’s via road links and boast very effective border control departments, it is easy to drive into the country but expect to wait for some hours at border check points as they do a good job of screening arrivals by road.

You can also enter Russia through any of the reputed bus lines that operate from Schengen states into Russia or from the Scandinavian states. Please do note that you will need a visa separately for the country you arrive from. This option is generally used by travelers with an adventure spirit.

To Russia By Railways:

Russia, again is connected to all its neighbours and even far off neighbours in the Western ends of Europe to the Eastern end of China via its rail network

China, Balkans, Eurasia, in the European side with France, Germany, Finland, Italy, Poland, Czech Republic, Latvia, Lithuania, Estonia, Belarus, Ukraine and Moldova have direct trains to Russia. Countries such as Austria, Bulgaria, Hungary, Serbia and Slovak Republic have through trains. The trains are always quite comfortable, if not brand new. Russia has an ongoing program that continuously upgrading its coaches which seems to work quite well.

Its latest addition to its rail service is the high-speed ‘Sapsan’ trains  which connect Moscow, St. Petersburg, Vladimir, Nijniy Novgorod and shortly which reach Kazan the 3rd capital of Russia, this train travels at speeds up to 250 km/h.

To Russia By Sea:

Russia has a vast network on in land canals and waterways, connecting all its major ports right from the Arctic Circle in the North to the Mediterranean Sea in Southern Europe. It has extensive sea and river cruising options that can be experienced and memorable trips created.

St. Petersburg is a major maritime centres that receive international ferries. Some of these journeys last more than a day. Make sure that your vessels are comfortable and safety on them is a priority.

Do make sure your documentation is legally valid with a valid visa, failing which you entry is certainly not possible via sea ports. Russia is a great destination to arrive to by a grand cruise liner with the luxury and style.