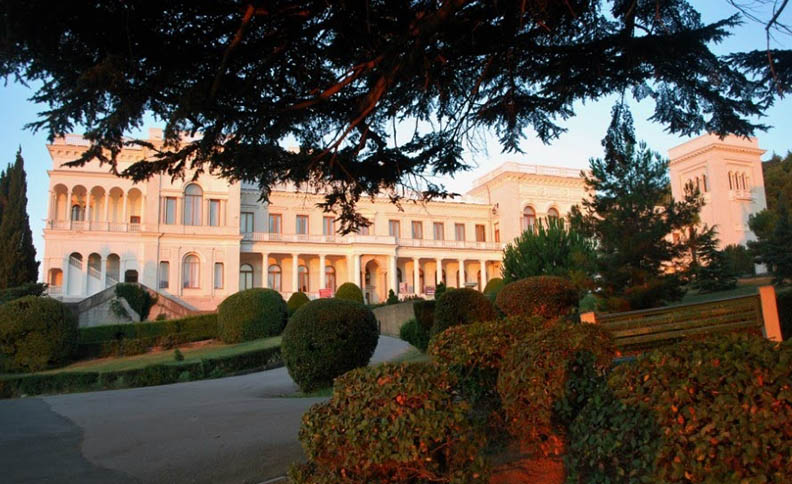 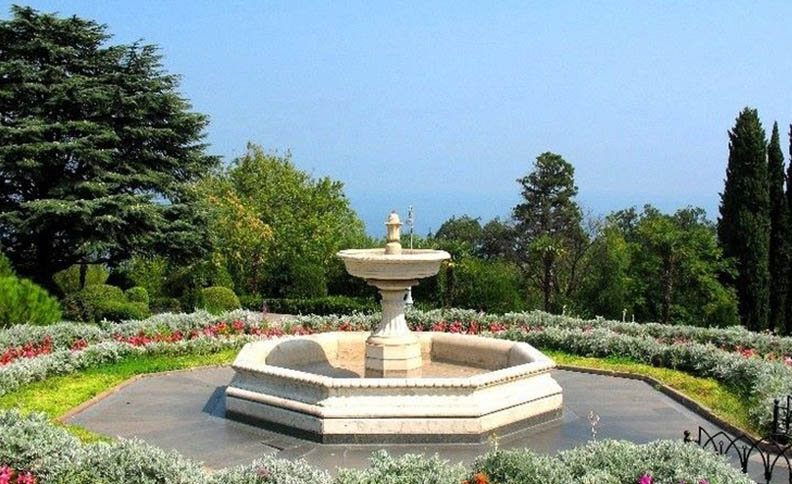 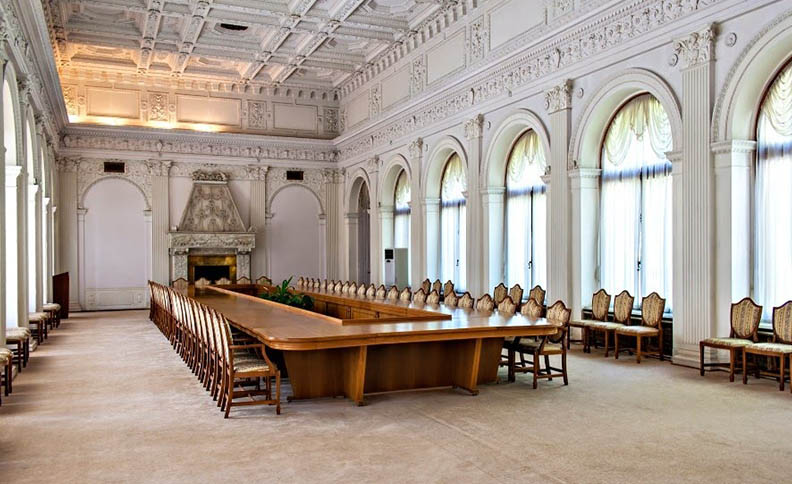 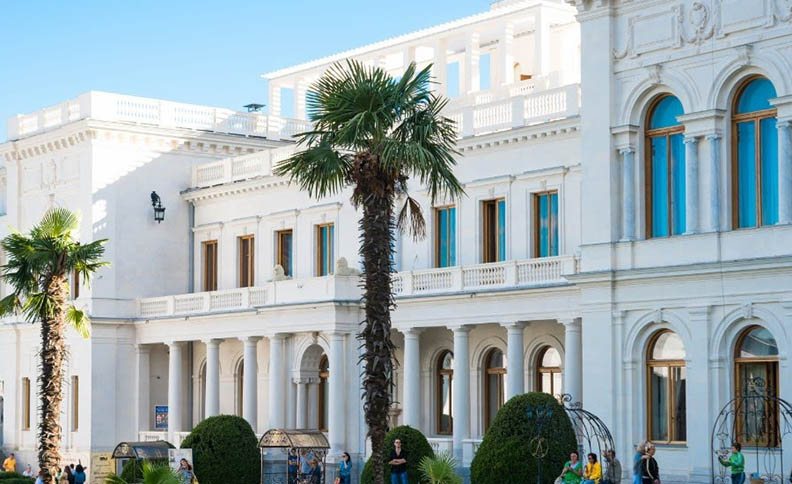 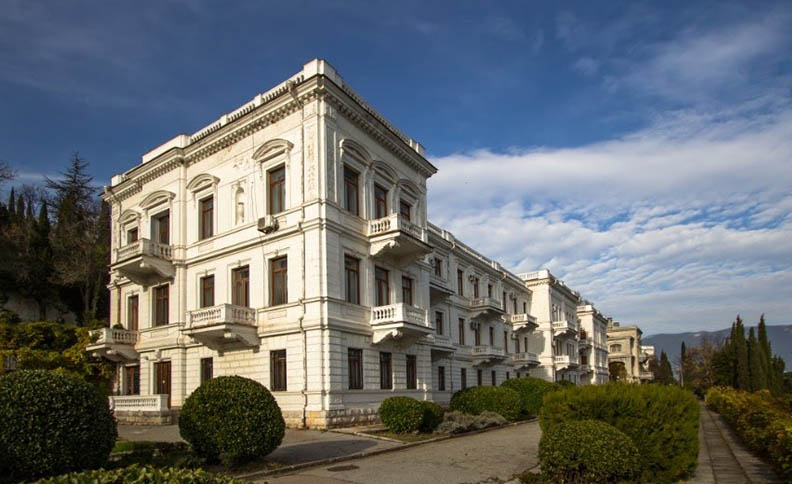 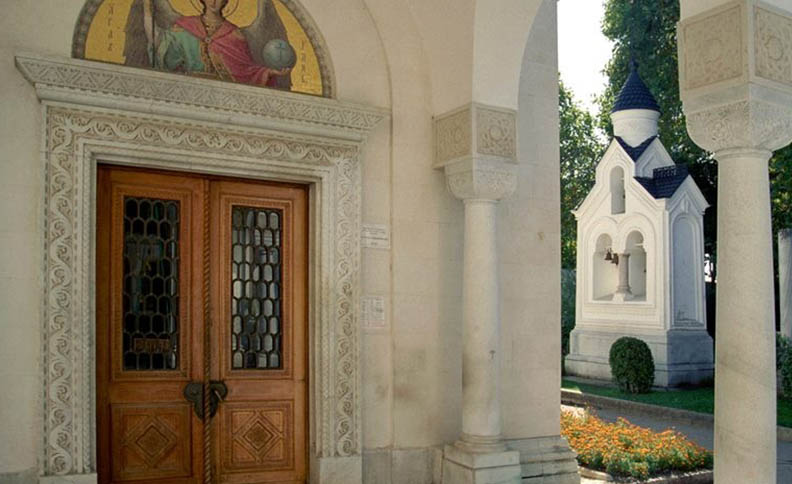 A piece of Italy in Crimea, the picturesque Livadia Palace a place where the future of present day World was written, the summer residence of the Royal family, the center of Russia’s foreign policy life, will impress you with its grace and grandeur. Here you can take a leisurely walk among the shady trees in the largest Park in the Crimea, as well as see the creation of the great sculptor Tsereteli and not only.

On the Eastern slope of mount Mogabi, three kilometers from Yalta, is located the Livadia Palace. It was the southern residence of three generations of Russian emperors. The place was specially chosen in such a way as to offer a magnificent view of the sea. But the history of the Livadia Palace began long before the construction of this architectural masterpiece.

The Livadia Palace became the southern residence of the Russian rulers in 1861. Before that, Livadia belonged to count Lev Potocki – an influential diplomat. After his death, the estate was purchased by the Royal family for Alexander II. Potocki’s estate was reconstructed for the needs of the Royal family. The construction work was supervised by the architect Ippolit Monighetti. They lasted from 1862 to 1866. During this time, about 70 different buildings were built, including the famous Holy cross house Church. It has been preserved to this day. After the death of Alexander II, Livadia was often visited by his son Alexander III, and then the owner of the estate became the Emperor Nicholas II. During the flood of 1909, the Royal residence was severely damaged. The old estate was demolished, and in its place in 1911 appeared a snow-white building. According to the project of Yalta architect Nikolai Krasnov, in a record time of 17 months, the Great Livadia Palace was built. The building is located at an altitude of 121 meters above sea level and is surrounded by a 46-hectare landscape Park. The Palace was built of white Inkerman stone. The snow-white building is made in the Italian Renaissance style and looks graceful and majestic, it is called a masterpiece of architecture. The Palace was built using technological tricks, the stone was impregnated with a special solution, and Italian and domestic craftsmen worked on every inch. In parallel, new roads were laid, vineyards were expanded, plants and trees were planted.

After the revolution of 1917, the Livadia Palace was declared a national treasure. And in 1925, they opened a sanatorium in it. During the great Patriotic war, the Palace buildings were severely damaged. After the liberation of the Crimea from the Nazi army in may 1944, two field hospitals were located in the Livadia Palace.

The Livadia Palace in Yalta became famous after the famous Yalta conference of the heads of the three allied powers was held there in 1945 between the USSR, USA and Great Britain after winning World War 2. The leaders of the “Big three” – Stalin, Roosevelt and Churchill-have a monument here, the designer of which is Zurab Tsereteli. The future of present day World was written here and agreed upon by the 3 powers.

The Livadia Palace became a health resort again in 1953. And in 1974, it opened its doors to visitors, there was an exhibition complex at the trade Union sanatorium “Livadia”. Officially, the dvortsovo-Museum complex started working on November 1, 1993.

Currently, the Museum’s exhibitions are located on the first and second floors of the Livadia Palace. You will be able to plunge into history: look into the bedroom of the Royal personages, see how the Emperor’s study, the Empress’s living room, the dining room, the library, the billiard room, the lobby and other halls are furnished. The Royal Solarium will not leave you indifferent. It is located on the roof of the Palace, offering a magnificent view. You can also see Italian and Arabic courtyards in the Palace. The Italian courtyard served as a place for rest and walks of the Royal family. It is designed in the Renaissance style, with a marble fountain in the center, and paths radiate from it to different parts of the house.

Another integral part of the Livadia Palace is the landscape Park. It was broken under count Potocki. The largest Park in Crimea, its area is more than 40 hectares, began to create a popular gardener of those times, E. Delinger. Now the Park has more than 400 species of plants that create natural harmony and unique Royal landscapes. In Livadia Park you can find wide paths and winding paths, shady alleys and green lawns, wonderful sculptures, fountains, flowering arches of climbing plants. Another highlight of the Park – the Tsar’s (Sunny) path-originates from the Livadia Palace. It was created for walking for medicinal purposes, its length is almost 7 kilometers. You can walk through the shady trees all the way to the coast of Gaspra village.

You can only see the interior of the Livadia Palace with a tour that lasts a little more than an hour.

You can appreciate the beauty of the Palace and Park, see how the Royal family lived and plunge into the amazing era of monarchs. Livadia Palace is a unique atmospheric place that has no analogues in the world.