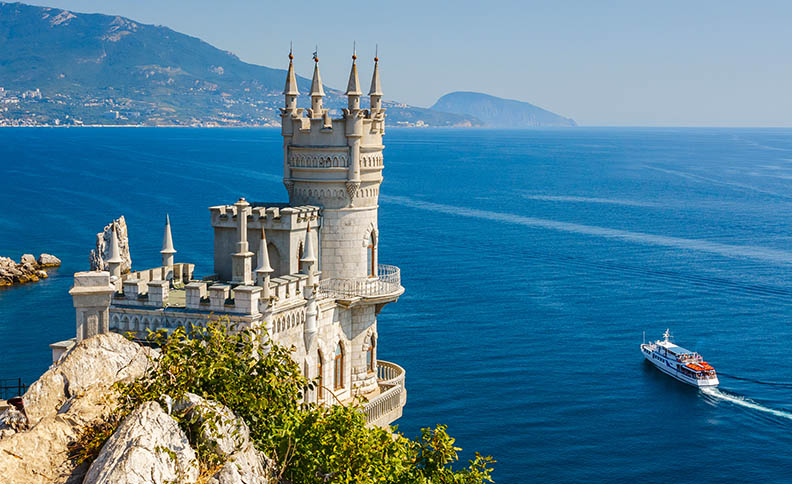 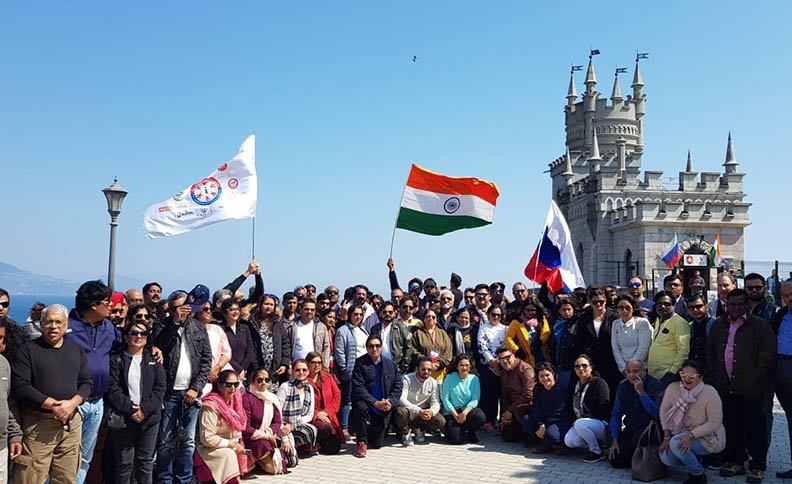 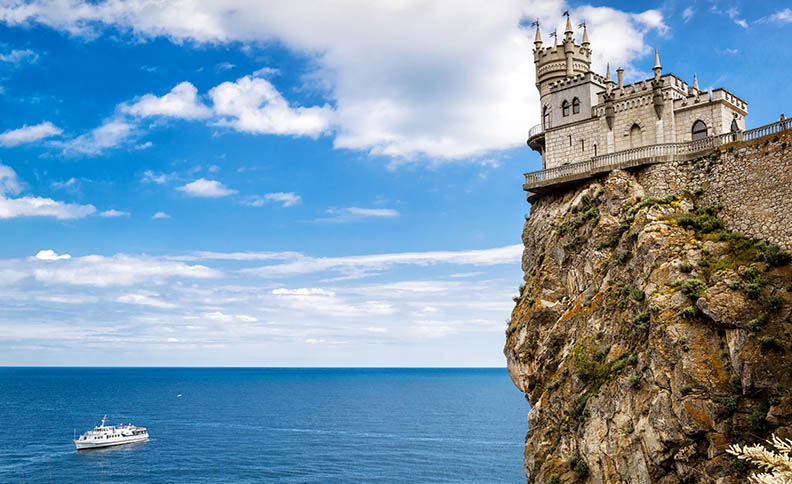 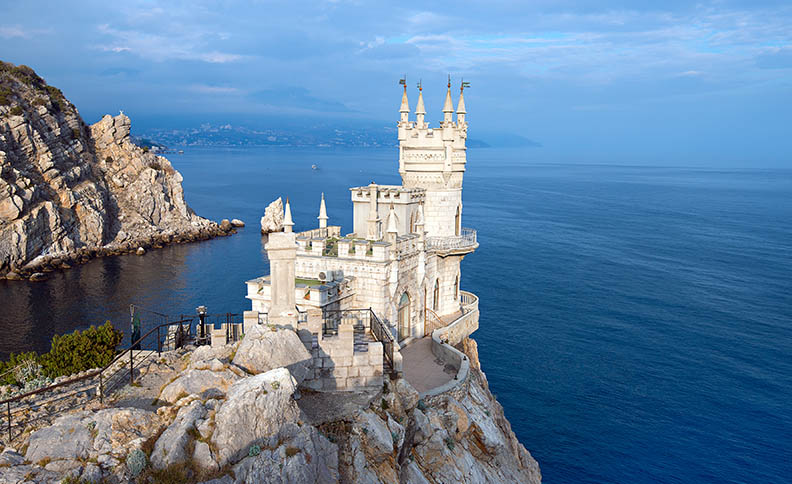 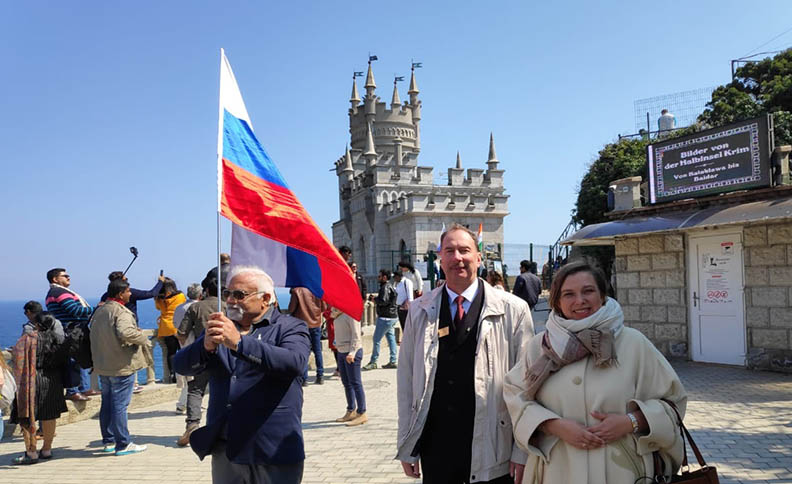 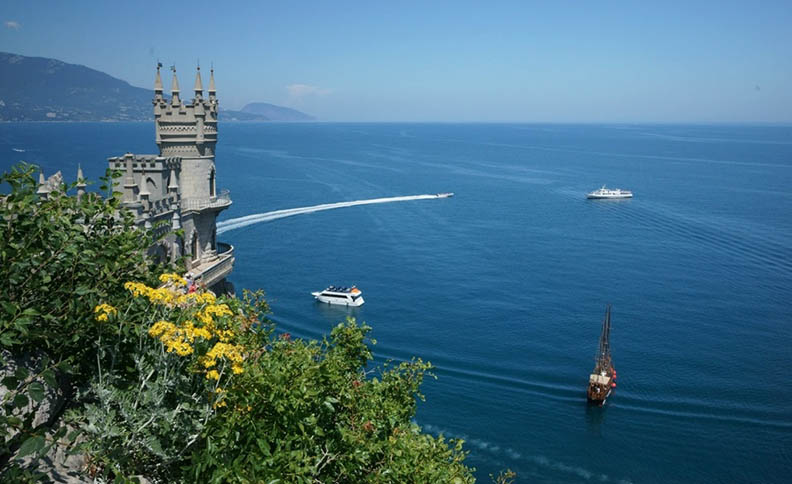 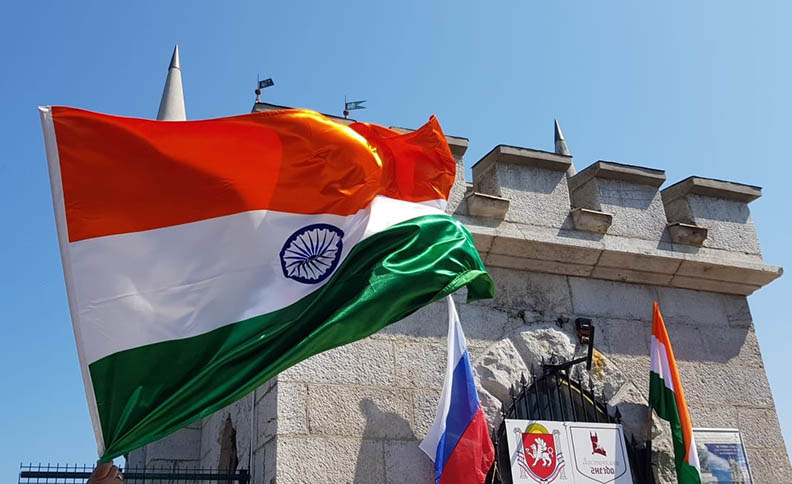 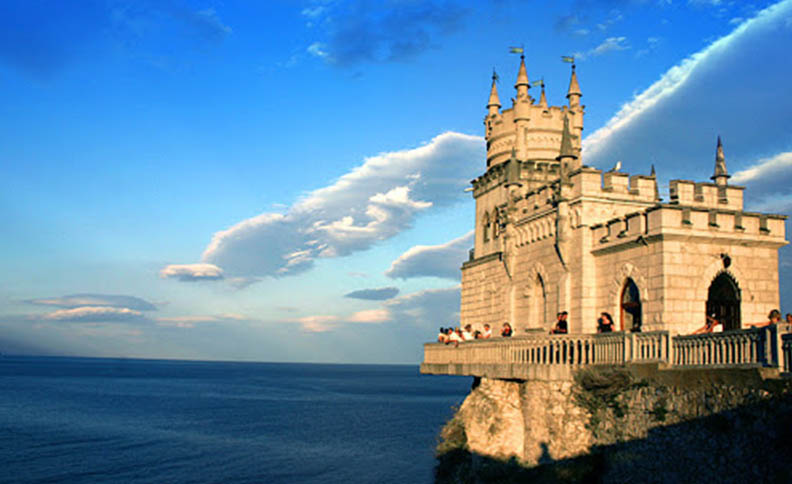 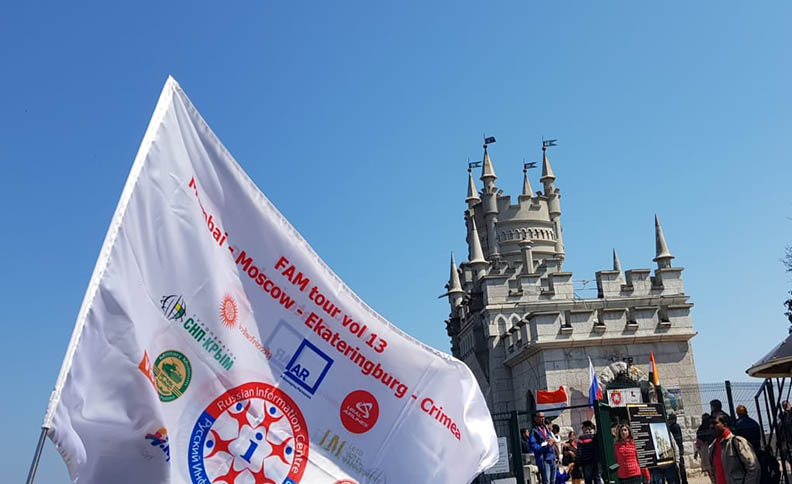 The visiting card of Crimea!

On one of the highest rocks of the southern coast of the Crimean Peninsula, there is an incredible medieval castle called Swallow’s Nest. Harmoniously fitting into the surrounding mountain landscape, it looks like it is looking at its reflection in the waters of the Black sea. Here you can admire the stunning scenery, plunge into history, and enjoy a sea walk.

The most recognizable landmark of the Peninsula is located in the village of Gaspra. The castle is perched on the middle spur of the AI-Todorsky Cape at an altitude of 38 meters above sea level. This elegant structure seemed to be miraculously strengthened on a steep cliff.

The history of the castle “swallow’s nest” begins in the 80-ies of the 19th century immediately after the Russian-Turkish war. Then it was a wooden one-story cottage built by a retired General, whose name history has not preserved. In 1903 the well-known Moscow merchant’s wife Rakhmanina purchased the land with a wooden structure. The merchant’s wife immediately demolished the old dacha, and in its place built a wooden castle, which she called the swallow’s nest. It had little resemblance to the current landmark.

In 1912, “swallow’s nest” acquires its modern appearance. Rich oil industrialist P. L. Shteingel becomes the new owner of the castle. He decided to build a Gothic-style building on a picturesque rock, resembling medieval palaces. His idea was implemented by the architect L. V. Sherwood. “Swallow’s nest” was built from grey Crimean limestone and yellow stone from the environs of Yevpatoria. The dimensions of the castle are actually “bird like” at 10 meters wide, 20 meters long, and 12 meters high. The ground floor of the Swallow’s nest had a small entrance hall and living room. On the second floor of the tower there were two bedrooms on different levels. A picturesque garden was laid out next to the building.

After the First world war in 1914, the castle passed into the hands of the merchant Shelaputin. He tried to turn the Swallow’s nest into a restaurant, but the establishment only made losses. After the merchant’s death, the Palace changed hands more than once.

As a result of the earthquake of 1927, a crack was formed in the rock on which the castle was located. The beautiful garden collapsed into the sea. The “swallow’s nest” itself was not damaged, but it hung dangerously over the water. In the 1930s, there was a library of the local recreation center “Pearl”, but soon the building was recognized as dangerous to occupy and closed.

In 1968-1971, repair and restoration works were carried out under the project of the Yalta architect I. G. Tatiev. A monolithic reinforced concrete slab was placed under the base of the castle, anti-seismic belts were made, and architectural elements destroyed by the earthquake were restored. In 2002, a second reconstruction took place. But only 9 years later, in 2011, the castle Swallow’s Nest became a Museum. It was recognized as an architectural and historical monument and opened to tourists.

Unfortunately, the building has not preserved any interesting historical interiors. To make visiting the Museum interesting, various exhibitions are regularly held here – art, ethnographic, archaeological, local history, and others. The Museum’s exhibitions are periodically changed and updated. And from the observation deck of the castle, you can admire the stunning Crimean landscapes. You can see a fascinating panorama of the Yalta Bay and surrounding rocks, as well as a view of the mountain Ayu-Dag.

You can visit the castle as part of numerous excursions or boat trips. In summer, you can reach the castle by boat or ferry, which regularly run from the Yalta embankment. You will be there in 20 minutes. This method allows you to enjoy the seascapes and stunning views of the “swallow’s nest” from the sea. The boat docks at the coast of Gaspra, from there to the” Swallow’s nest ” leads a road with 1200 steps. During the ascent, you can relax on the benches along the path and enjoy the beautiful landscape.

The Museum is open all year round. In the season, from may to October, the castle is open from 10:00 to 19:00 seven days a week. The rest of the time (from November to April) – from 10:00 to 16:00, the day off is Monday. There are several cafes and restaurants near the attraction. Here you can relax and have a snack, enjoying the magnificent view of the Swallow’s nest.

Outdoor enthusiasts can plunge into the sea to a mysterious cave located directly under the castle in the Aurora rock. For diving in this place requires a little experience, so you will have to use the services of an experienced instructor-diver. The cave has many passages and grottos, several entrances and exits. There is also a dry part of the cave where you can rest during the dive.

In 2016 and 2019, swallow’s nest was visited by delegations from India who were in Crimea on promotional tours organized by the Russian Information Center (India). In honour of the arrival of the delegation, there was an excursion and a meeting with the management of the swallow’s Nest Museum, and two flags – Russia and India-were hoisted over its doors. Read more: https://russinfo.center/articles.php?art_id=261  , https://russinfo.center/articles.php?art_id=197

The majestic and elegant Swallow’s Nest will undoubtedly impress you. The castle seems to float above the waves, and from below it seems that its spires can reach the clouds. You should definitely visit this place to see this stunning architectural and historical monument first hand!