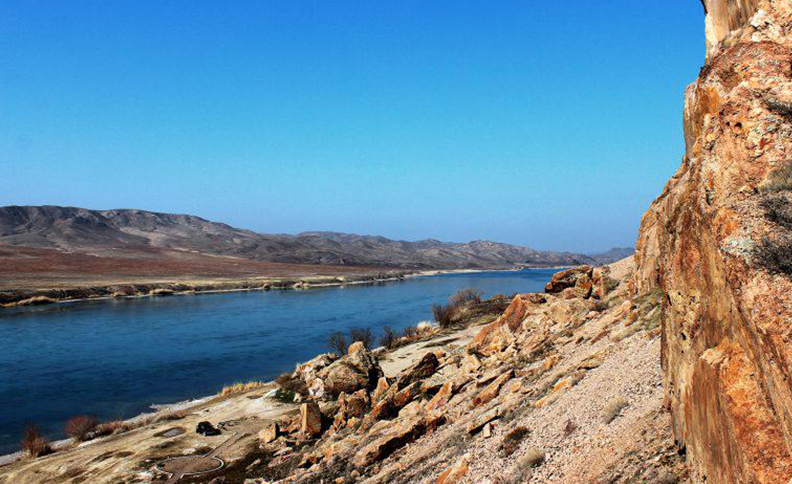 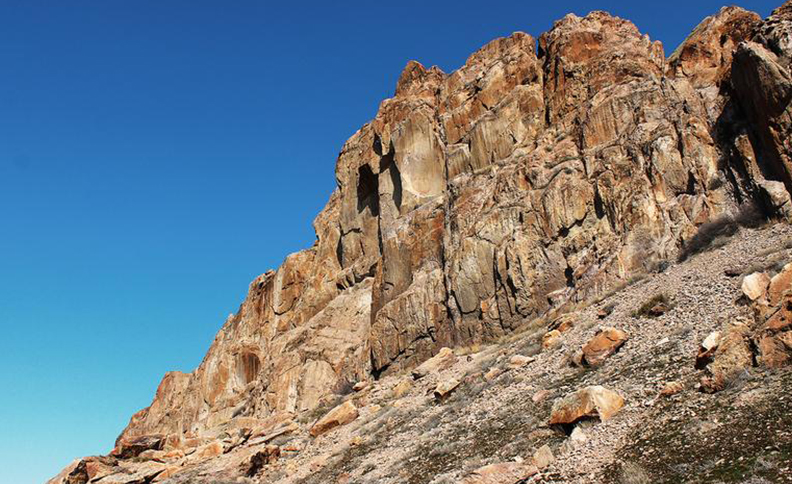 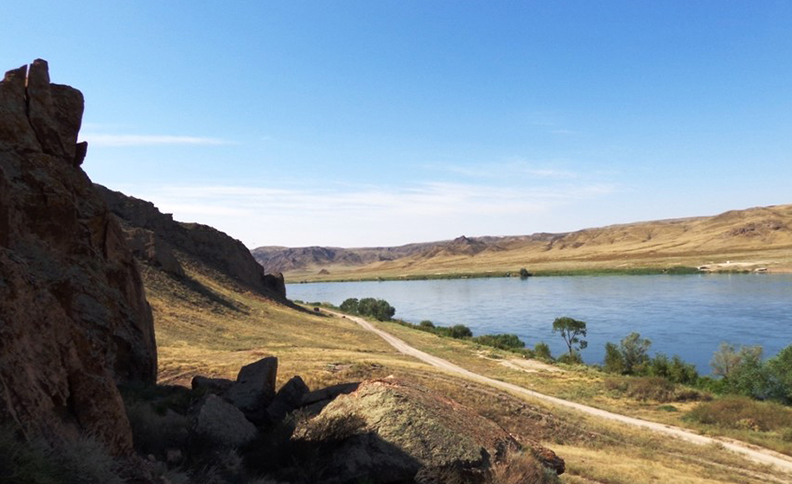 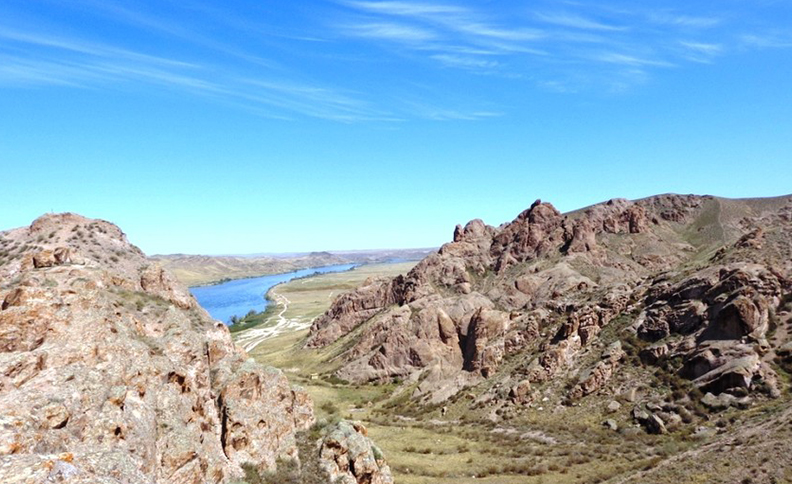 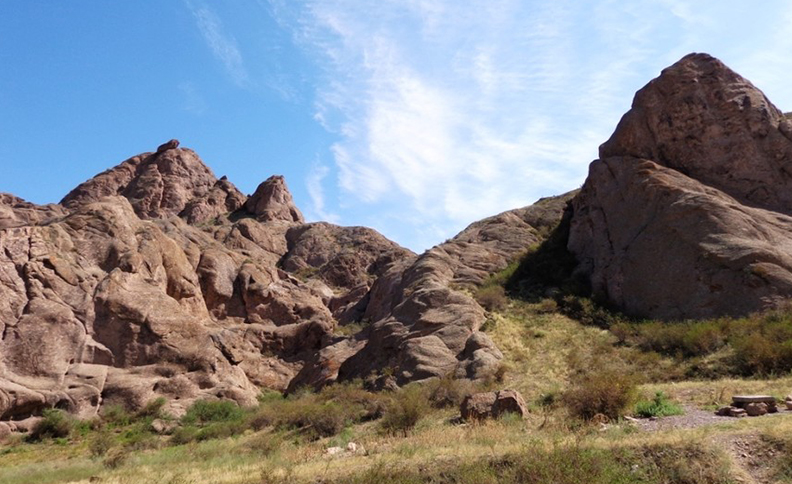 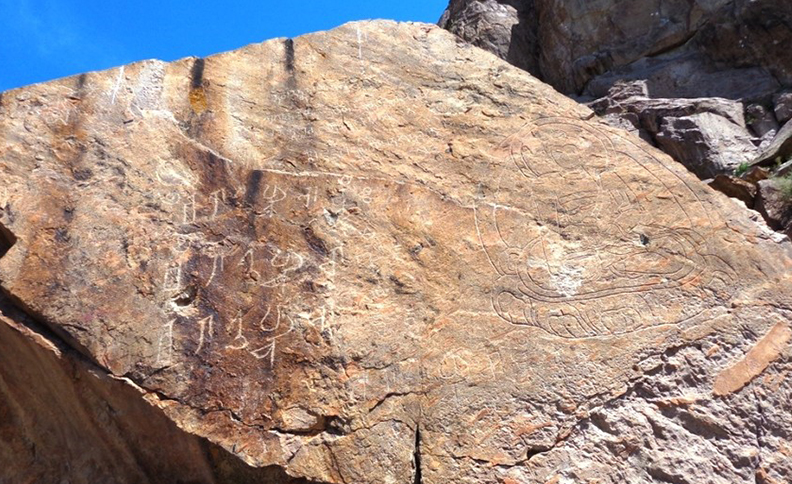 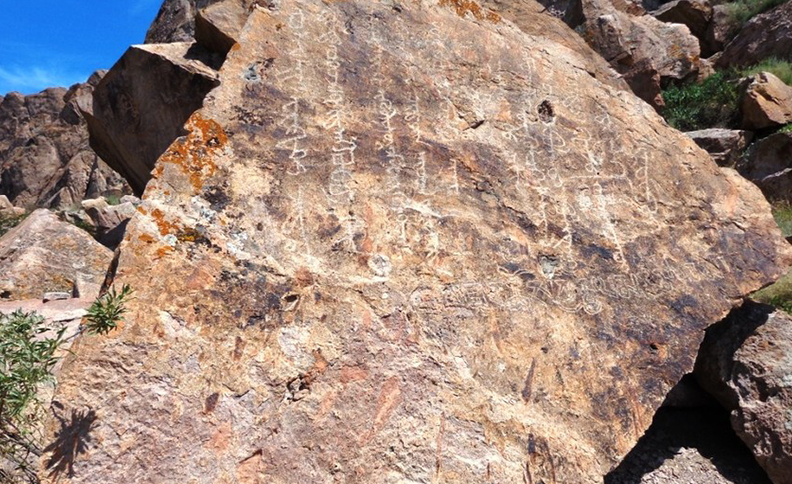 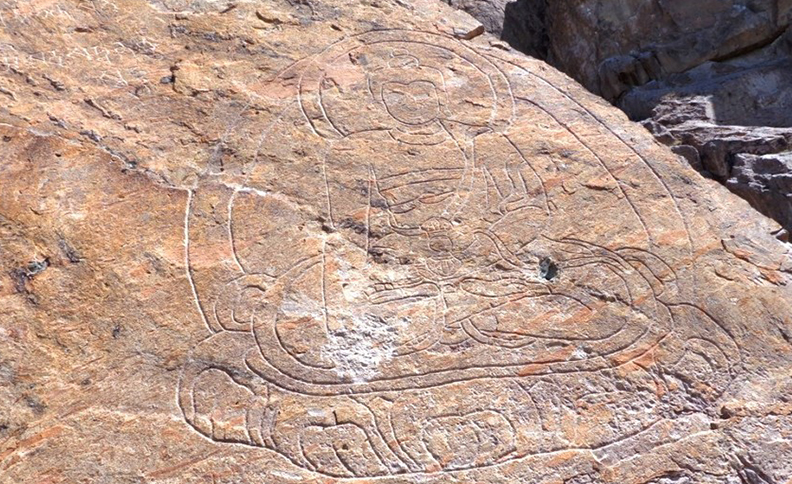 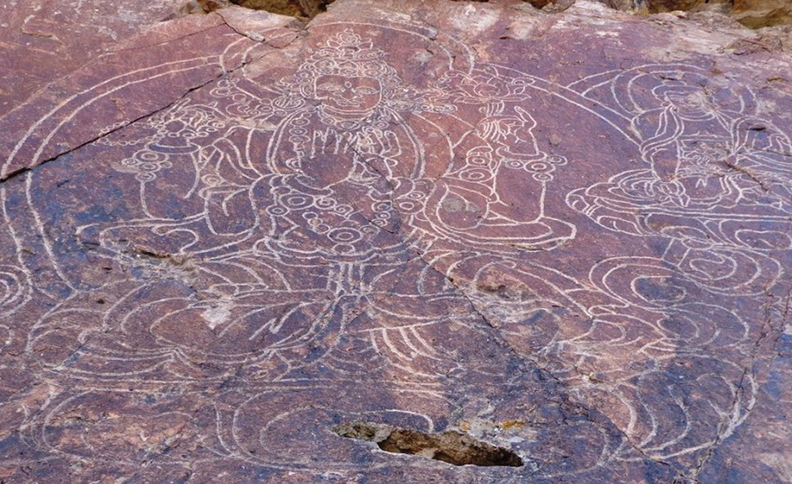 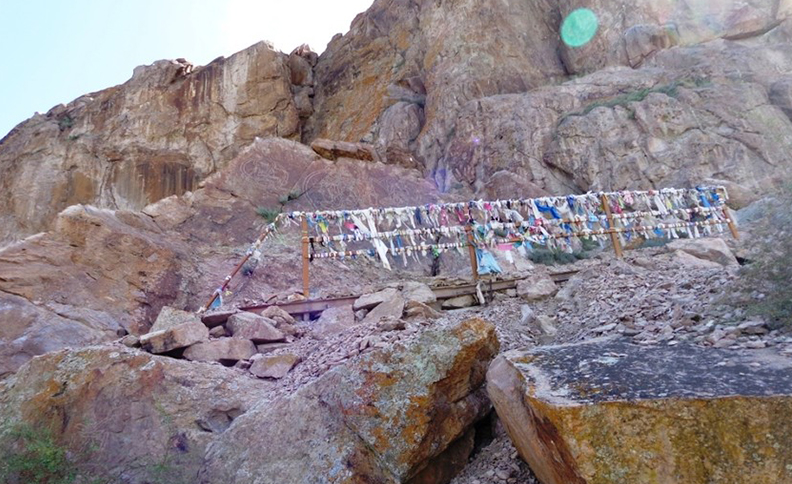 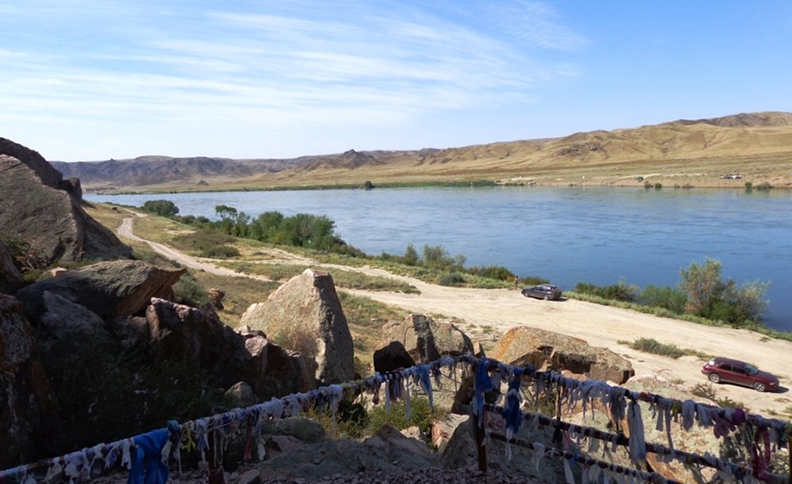 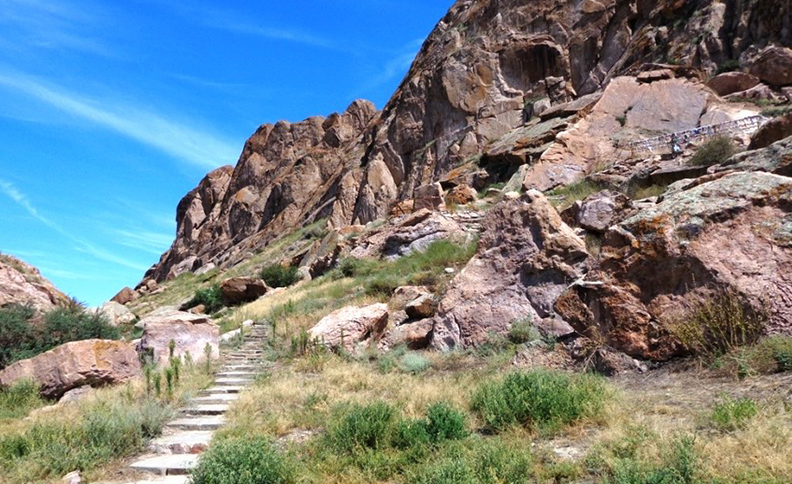 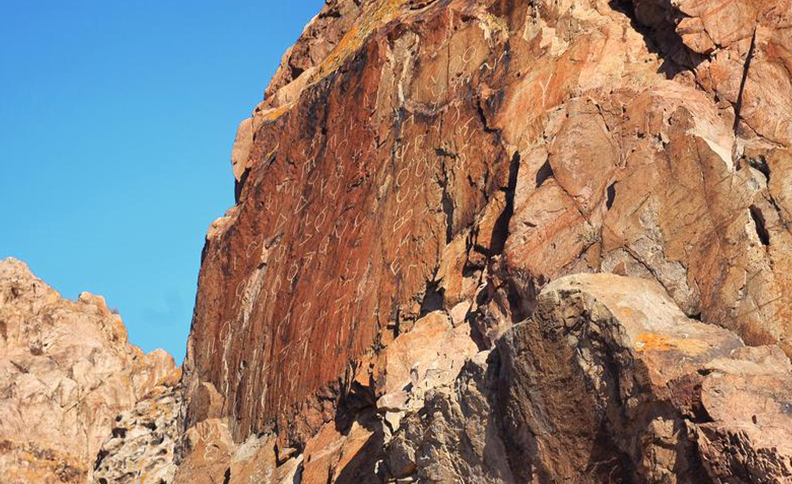 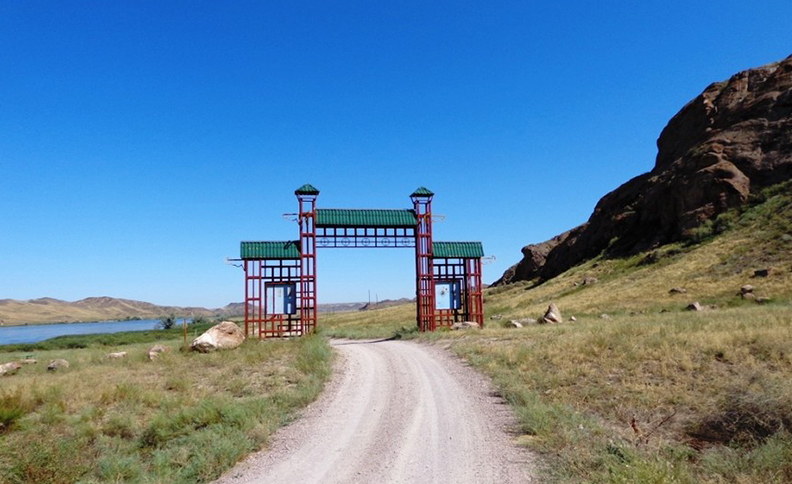 A hundred kilometers from Almaty is the Tamgaly-Tas gorge, on the river Ily, where many petroglyphs, images of mysterious deities, and Buddhist carvings have been preserved on the rocks. The most famous are the images of the Buddha, the sacred text under which reads in Sanskrit: “Blessed be the one born of the lotus.”

The image of Bodhisattva Avalokiteshvara, to whom one of the most famous Buddhist mantras “Om Mani Padme Hum” is dedicated, is depicted on the central rock of the Tamgaly-Tas. There is an inscription near it, meaning in translation: “I worship the holy Avalokiteshvara.” To his right, at a height of four meters, Shakyamuni Buddha is depicted, next to him is another inscription: “I will worship Shakyamuni Buddha.” And on the left is carved the image of Burkhan Mangla — the deity of healing.

There are many legends around the Buddha images. One of them says that in the X century, when one of the Buddhist missions stopped on the riverbank or during a hike in Semirechye, an earthquake occurred and a large piece of rock fell to the ground. This phenomenon was regarded as a sign of the need for travelers to return to India. On a broken piece of rock they carved three images of the Buddha and few letters on Sanskrit.

The Ily River deserves special attention. This is the largest river of Zhetisu, or in Russian Semirechye. Its source is located on the territory of China, the river flows through the entire Almaty region, between the Trans-Ili Alatau and the Dzungarian ridge, flowing into Lake Balkhash. The name “Ily” comes from the Mongolian word Ilansu — sparkling, shining. Caravans from China, India, Iran and Uzbekistan used to travel along or along the Silk Road.

An ancient legend about the beautiful lady Ily is connected with the river Ily. In short, the powerful sorcerer Balkhash had an only daughter — the beautiful Ily. Balkhash dreamed of marrying his daughter to a rich and noble man, but Ily fell in love with a poor shepherd Karatal. To get his daughter married, Balkhash arranged competitions for the grooms, at which Karatal defeated all the sons of khans, sultans and bais. The sorcerer did not keep his word and did not want to give his daughter to a poor man. Then the lovers decided to escape. In anger, Balkhash caught up with the fugitives and ordered them to return, but Ily and Karatal refused. Then Balkhash turned into a large lake between them, and Ili and Karatala turned into two rivers flowing into the lake in different places. Lake Balkhash is half fresh, half salty, because Ily and Karatal cannot connect.