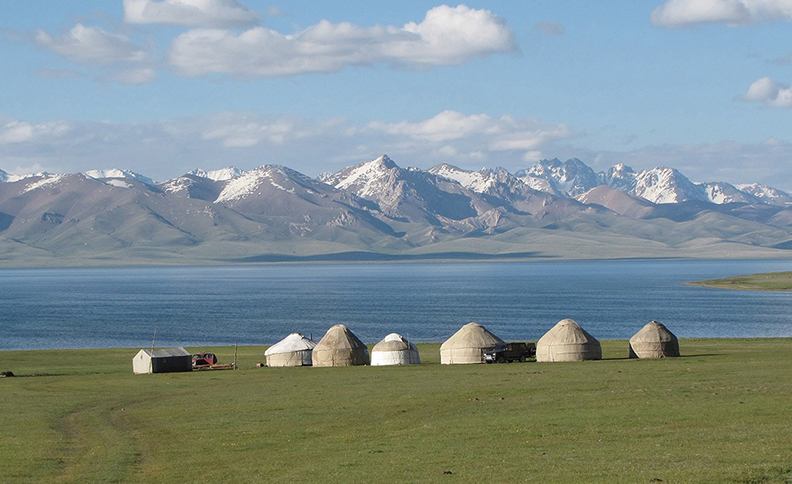 Son-Kul Lake (also Song-Kul, Son-Kel, Sonkul, etc.) is a large alpine lake, the second largest in Kyrgyzstan, which is located in the Naryn region, about 280 kilometers from Bishkek. Son-Kul is located at an altitude of 3000 meters in a large intermountain valley bounded from the north by the Sonkul-Too ridge and the Moldo-Too ridge from the south. The lake is fresh and quite deep — the maximum depth of the lake is 14 meters. Around the middle of November, Son-Kul freezes and thaws only by mid-April.

The area around the lake is very picturesque, especially in summer. Son-Kul is surrounded by low hills, behind which peaked peaks and snow ridges of the Central Tien Shan can be seen. Due to the high altitude, there are absolutely no trees here, since only low hard grass and numerous edelweiss grow in such conditions.

Son-Kul is a rather inaccessible place, and therefore the anthropogenic impact is minimized here. Only in the summer do nomadic camps arrive here from villages located in the neighboring Jumgal Valley and from Naryn. The rest of the time, the Son Kul Valley is completely uninhabited.

On the northern shore of the lake there is the only stone building in the entire valley — the mausoleum of Tailak Baatyr, built at the end of the XIX century.

Son-Kul Lake is very popular among tourists. There are a large number of tourist routes here, and thanks to the convenient geographical location of the lake, a trip from one part of the country to another can be combined with a visit to Son Kul. Also, Son-Kul is very interesting because in summer you can clearly see the nomadic way of life here and spend a couple of days away from civilization.