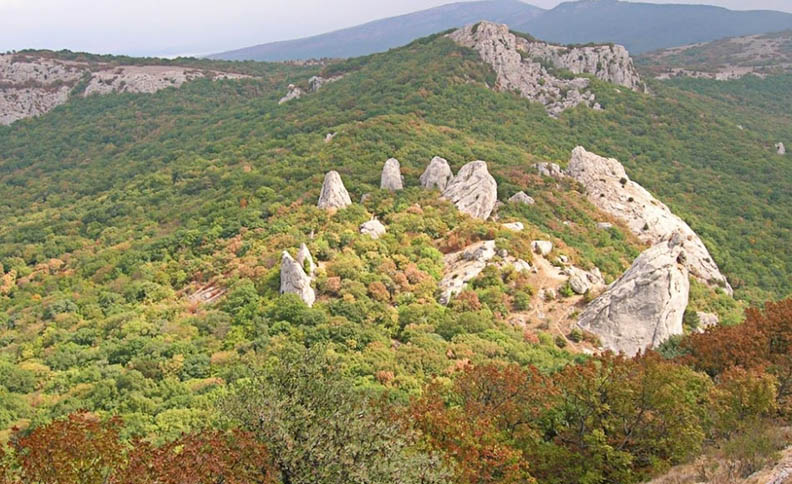 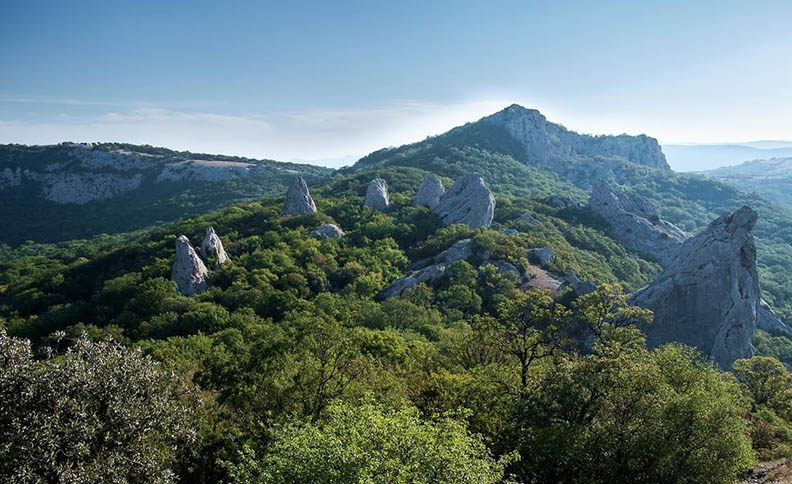 Above the southernmost point of the Crimea − Cape Sarych − rise the cliffs of Ilyas-Kaya, named after the Greek monastery of St. Elijah, built in the 12th  Century. The mountain is also notable for the fact that here, a little below the monastery, there is a “Temple of the Sun” − 7 pointed rock ledges located in a circle with a large stone-block in the center, which schematically resembles the sun. Perhaps it was because of the appearance that the name was given.

But the monument, whether of nature or architecture (scientists are still arguing over this), has several other names. When this area was inhabited by Tatars, they used to call the pointed protrusions − Kiban-Kai, which translates as “the haystack”. You can also hear variations such as:  seven fingers, sugar heads or even dragon teeth. At what time and why there was a “Temple of the Sun” is unknown, but today it is known by this name.

Legends, mysticism, and mysterious stories of this place attract tourists. Some say that during the Second world war, German scientists conducted secret research here. Someone claims that the “Temple of the Sun” is a place of extraordinary power, and if you make a wish, it will be fulfilled. Or, if it is difficult to make a decision, you will definitely find the answer when visiting this rock circle.

From here you can enjoy beautiful views of the Crimean mountains and YUBK. Here the cleanest air, silence, privacy and tranquillity exists.

In recent years, the “Temple of the Sun” has become very popular and probably for a reason. People come here to meet the Sun rise, charge water or amulets, and perform whole rites, rituals, and meditate around the altar stone. Some even leave offerings in the form of food or some things, write notes, leaving them at the stone.