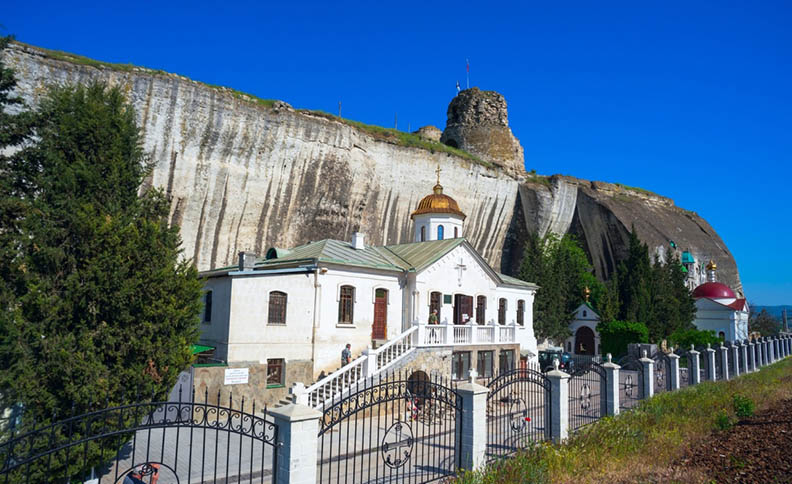 On the right Bank of the Black river in caves cut in the rocks of Inkerman is the St. Klimentovsky monastery. Previously, these iconic premises were used by the inhabitants of the fortress calamita built in 1427 by Prince Alexei — ruler of the Principality of Theodoro, and even more ancient fortifications Zagatalsky wall.

According to legend, the Foundation of the monastery is associated with the name of Saint Clement — the 4th Pope of Rome in 92-101, exiled for preaching Christianity by the Emperor Trajan to the quarries in the vicinity of Chersonesus and suffered a Martyr’s death here in 101.

According to researchers, the rock-cut Basilica of the main Church of the monastery of St. Clement was built in the period from the 8th to the 15th century. There are two more cave churches nearby: in the name of St. Andrew the first-called And St. Martin the Confessor.

After the capture of the fortress by the Turks in 1475, the monastery gradually fell into decline. The monastery began to revive only after the annexation of the Crimea to Russia in 1783. Inkermanskaya kinovia opened again in 1850, and existed here until 1926, when the Soviet government abolished it. On December 15, 1931, the ancient cave temples also ceased to exist.

During the great Patriotic war, the caves of the monastery housed the headquarters of the 25th Chapaev division of the Primorye army, which in June 1942 on the Inkerman heights held back the enemy, who was rushing to Sevastopol.

60 years after its closure, the monastery resumed its services through the work of its Abbot, Archimandrite Augustine, the brethren, and the laity. A gradual revival of the monastery and restoration of temples began. A part of the relics of the Holy Hero martyr Clement was transferred from Kiev, which are still kept in the St. Clement’s Church.