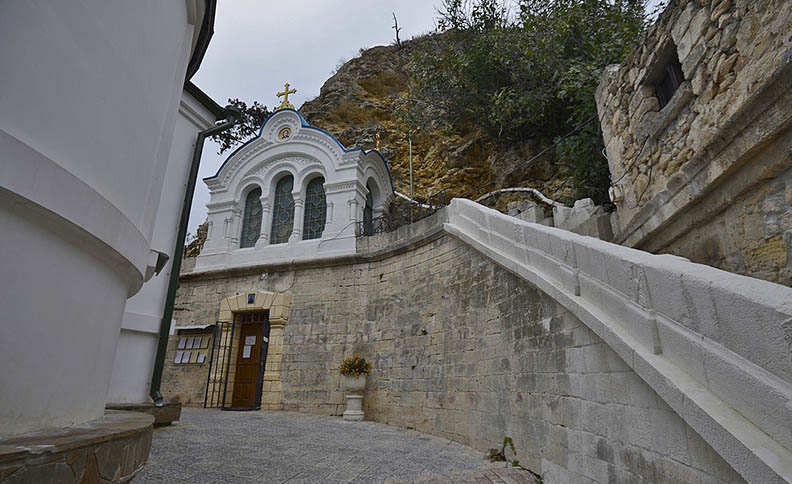 There is a legend about Greek navigators who were caught in a storm, their ship was carried on the rocks to certain death. Then they raised their hands to the sky and began to pray to their patron Saint – Saint George the victorious. And a miracle happened: Saint George appeared, and the storm subsided.

In gratitude for the rescue, on the rock in the form of a small island, where the Holy Phenomenon occurred, a seven-meter metal cross was installed, and the St. George monastery was founded on the shore. There are 800 steps leading from the monastery to the Jasper beach.

The monastery, being one of the few Christian monasteries on the Peninsula, existed both under the Genoese and during the Crimean khanate.

In 1820, Alexander Pushkin visited Sevastopol. A rotunda gazebo with a memorial plaque dedicated to this event is located near the St. George monastery. At various times, the monastery was visited by the emperors Alexander I, Nicholas I, Alexander II, Alexander III, Nicholas II with the Empress Alexandra Feodorovna, as well as representatives of the Russian intelligentsia: A. Chekhov, A. Griboyedov, I. Bunin, I. Aivazovsky, A. Ostrovsky.

During the Crimean war, the buildings of the monastery were occupied by allied troops, however, but the building was preserved.

After the celebration of the millennial anniversary in 1891, it was decided to equip the territory of the monastery: the buildings were renovated, a 640-meter staircase was laid to the monastery and to the sea shore.

On November 29, 1929, the St. George Balaklava monastery was liquidated by the Soviet authorities and transferred to the resort trust. In Soviet times, it was located on the territory of a military unit.

The revival of St. George’s monastery began in 1991, on the day of its 1100th anniversary, when the works of the Dean George Polyakov  installed a new seven-meter cross to replace the lost one.