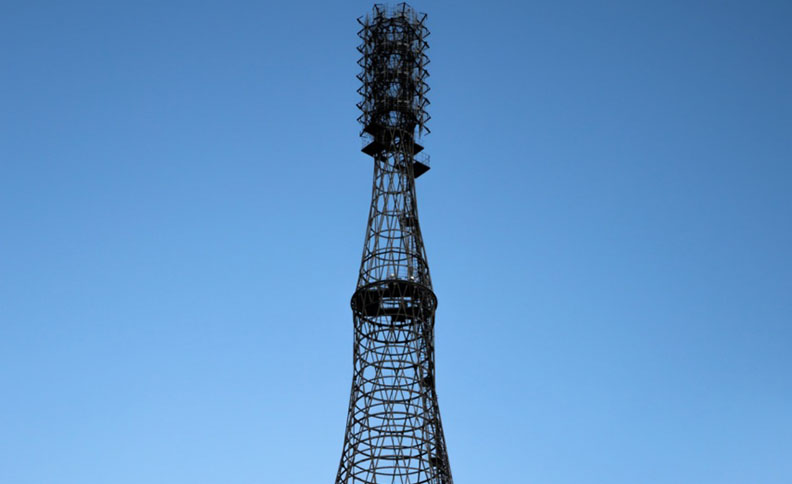 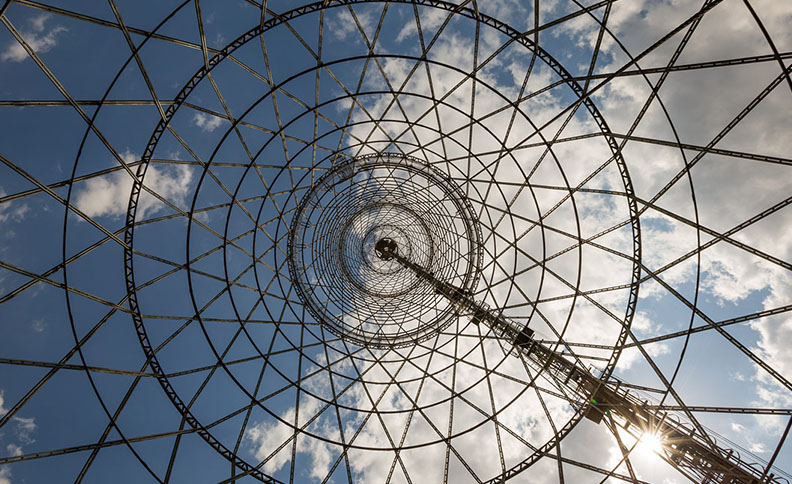 One of Moscow’s attractions, which is simply impossible to pass by, is a magnificent high – rise building of the beginning of the XX century – the Shukhov television tower. To see the slender beauty, you need to take the metro to the station “Shabolovskaya”. And then you will not get lost: the tower immediately comes into view. Engineer V. G. Shukhov originally planned to build a tower with a height of 350 m, but due to the lack of metal (there was a civil war), the project had to be slightly changed, and now the tower rises “only” 160 m above the ground.

Thanks to the original method used by Shukhov, less than 13 tons of metal was used for 1 m of the tower. For comparison, 1 m. of the famous Eiffel tower is almost 2 times more – 22 t. The Shukhov tower consists of sections, each of which is equal in size to 25 m. in order to carry out high-altitude work, neither helicopters nor scaffolding were used. Shukhov came up with a different method: each next section was collected inside the previous one and then lifted up using winches and blocks. This way we also managed to save money.

The fate of the author of the Shukhov tower project was not easy. During construction, he suffered two personal tragedies, burying close relatives. There was a threat over his own head, too. When the fourth section was being prepared, an accident occurred. Fortunately, there were no victims, but Shukhov was tried and sentenced to conditional execution. This meant that if the construction could not be completed on time or other emergencies were allowed, then the execution would turn from a conditional one into a real one. So, with the sword of Damocles over his head, the talented engineer continued the work and completed it brilliantly. In just 2 years (1920-1922), the tower grew to its present size.

The openwork-mesh tower has an amazing margin of safety, despite its lightness: it faithfully served people for almost 90 years, and it never needed major repairs. Thanks to the mesh structure, it has increased resistance to the destructive force of winds that usually affect high-rise structures.

From 1939 until the beginning of the XXI century, the tower was used for TV broadcasts. It became a symbol of Soviet television. Viewers have seen it in many programs, including the beloved “Blue light”. The ingenious creation of engineer Shukhov was recognized abroad. So, in Munich, at the exhibition “the Best structures and structures in the architecture of the XX century.” there was a gilded six-meter model of the Shukhov tower.

The creation of a Soviet engineer, whose construction principle was then repeatedly used by Shukhov when developing projects for water towers and other structures, served as a source of inspiration for A. N. Tolstoy when he composed his fantastic story that stirred the world: “engineer Garin’s Hyperboloid”.

Years go by, and the Shukhov tower still stands proudly above the capital. Of course, time takes its toll, and corrosion gradually begins its destructive effect. Last used for TV broadcasts in 2000-2001, today the tower plays the role of an interesting tourist destination. The Moscow authorities are going to develop this idea further: there are projects that involve planting a garden and Park zone around the tower, installing children’s attractions and cafes. Modern shopping centers and small interesting museums near the tower could help turn part of Shabolovka into an attractive area for tourists and local residents.

There is another idea about using the tower: it can be moved to the Park. But residents of the district are against being deprived of such a wonderful decoration. Therefore, most likely, the Shukhov tower will remain in the same place. Apparently, you can not fear for her fate: the residents of the capital will not give offense to such a beauty, even if “retired”. It is only necessary to restore it a little, in particular, to carry out anti-corrosion treatment. So the finest hour at the Shukhov tower is still ahead.

Visit grand locations like the Shukhov Tower and loads more that Moscow have to offer!