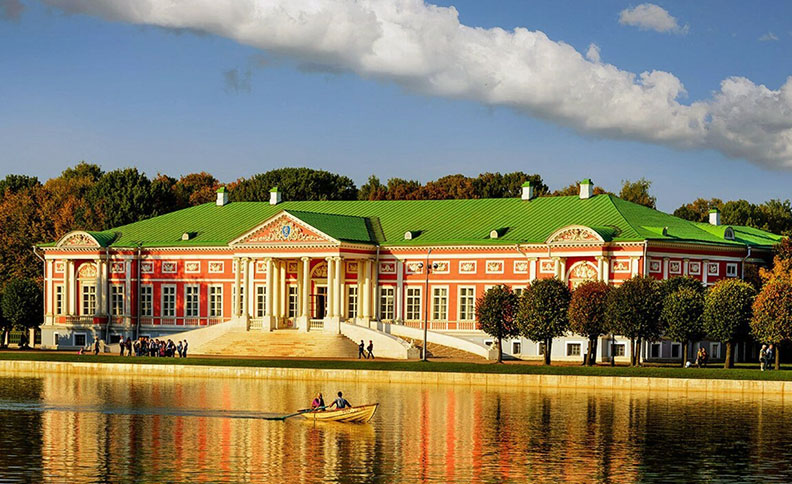 The old noble manor of Kuskovo – the former estate of the counts Sheremetevs – is a magnificent example of garden and Park architecture of the XVIII century. This magnificent estate is one of the oldest wooden estates in Moscow. Initially, the land was owned by A. a Pushkin, until it was exchanged for count V. a Sheremetyevo. Since then, for more than 300 years, the land has been owned by the Sheremetyevo family. The fact is that the Sheremetevs owned only a small plot, and all the other land in the district belonged to the state Chancellor Alexey Mikhailovich Cherkassky. After the marriage in 1743 of count Peter Borisovich with the only daughter of Prince Varvara, who was a member of the highest court and was considered the richest bride in Russia, the Sheremetevs became the sole owners of these lands. Initially, Varvara Alekseyevna was married to the famous satirist Prince Antiochus Cantemir, who refused the wedding, believing that the marriage would interfere with his literary and scientific pursuits. Peter Sheremetev, having retired from the court service, was happy to take up the improvement of the estate. He personally supervised construction work in all areas: the layout of the Park, the construction and decoration of the Palace and pavilions. The Kuskovsky ensemble as a whole was formed in 1750-1770.

The wooden Palace, built under the guidance of the famous Moscow architect Karl Blank in the style of early Russian classicism, was intended for a ceremonial reception of guests in the summer. The Palace was two-storeyed and consisted of a main floor and a mezzanine, on a high stone plinth. The main entrance of the Palace is reached by a white stone staircase and gentle ramps-descents for entering carriages.

The manor complex was designed for lavish receptions and entertainment. For these purposes, Park pavilions and gazebos, a greenhouse and Kunstkamera, a menagerie and a hunting Lodge were built. There was a small flotilla of rowing vessels on the Kuskovsky pond. Spread over 230 hectares, the estate gathered up to 30 thousand guests during special receptions.

Not far from the current intersection of Veshnyakovskaya and Yunosti streets, the famous Kuskovsky theater with 150 seats was located. In addition to the permanent theater, there was also an “aerial stage” in a garden of lime trellises with a large amphitheater for 80-100 seats. “This” air theater ” was still in Neskuchny, the village of D. V. Golitsyn. The place where the air theater was located has been preserved to this day, it is located in the Eastern part of the regular Park.

On the territory of the estate, at that time, there were 17 ponds. “Ponds Kuskovo was full of expensive fish; fish was so much that Seine caught at a time of 2000 carp, and once the pond was dredged a shell with a pearl; in the old days at the pond were a few fishing huts, standing cabin boats and boats, was the island with the ruins were sailors in skipper coats coffee and cherry color with white buttons,” wrote the researcher of old Moscow Michael Pylyaev.

A worthy frame of the Palace complex is a French regular Park with beautiful ponds and marble sculptures.

During the Patriotic war of 1812, Kuskovo was occupied by the corps of Marshal Ney. The officers of the Napoleonic army were based in Kuskovo. Many valuables after the visit of the French troops disappeared without a trace. The woven Wallpaper of the Palace walls was torn off, and the Park sculpture was partially broken.

In 1918, Kuskovo received the status of a Museum-estate, the Museum’s exhibitions include collections of porcelain, ceramics and glass of the State Museum of ceramics, which was transferred to Kuskovo in 1932. During the great Patriotic war, the estate was built as a barracks where the cadets lived in the village of Veshnyaki Central school of sniper training instructors. Since 1960, the Kuskovo estate has been located within Moscow.

In 2017-2019, the Museum underwent extensive restoration work. In 2019, after restoration, the Grotto pavilion was opened. The shell decoration of the interiors, lost during the years of existence of the monument, was most fully restored. Specialists of the all-Russian art research and restoration center (vhnrc) named after I. E. Grabar worked on the restoration of “grotic” clay sculptures and story panels inlaid with shells, corals, and mother-of-pearl that have no analogues in the museums of our country. This was the first comprehensive restoration of the entire pavilion collection in the Museum’s hundred-year history (in the twentieth century, the work was limited only to maintaining the monument and preserving the shell decoration).

The main value in the decor of the cabinets is the decoration of 24 types of shells from tropical seas (the Mediterranean and Black seas, the Indian, Atlantic and Pacific oceans). For the first time, the Grotto shells were replenished, which was particularly difficult to identify and obtain in the required volume (some types of shells were listed in the Red book).

In conclusion, we would like to note that the Kuskovo estate is a unique structure of Russian architecture of the XVIII century. Visiting it, you will plunge into the unique atmosphere and enjoy the magnificent landscape. We guarantee that you will be delighted and get only positive emotions from visiting it. We will always be happy to see you there!

Visit the grand locations like Kuskovo Estate and loads more that Moscow have to offer!