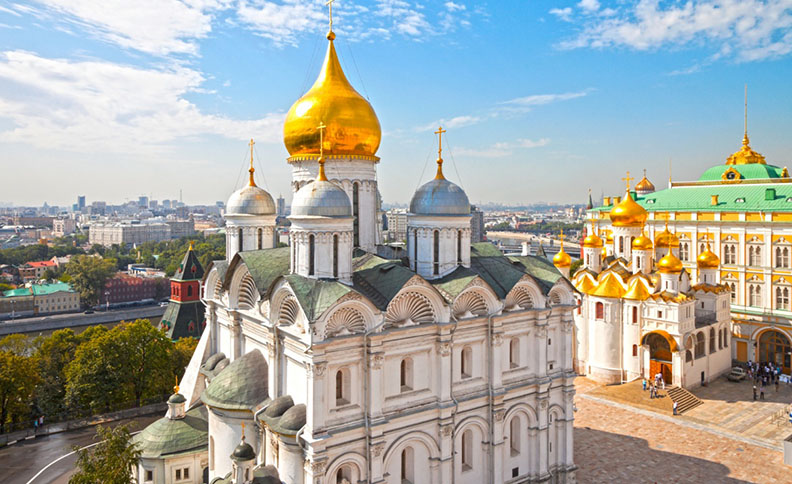 The Annunciation Cathedral Moscow is part of the architectural ensemble of the Moscow Kremlin, which is located on Cathedral square. Like all other elements of the architectural ensemble, during its centuries-old history, the temple has suffered many times from fires and human hands, many times it was rebuilt and restored again. The modern Cathedral stands on a white stone basement of the end of the 14th  — beginning of the 15th century.

Today, the walls of the Cathedral have a more modern painting, as the temple was severely damaged during a fire that occurred in 1547, and in the past there was an iconostasis with icons of the pen of Andrei Rublev and Theophan the Greek, who were reputed to be the best masters of their era. Among the attractions, you should pay attention to the floor of the Church, which is a set covering of Jasper of a special honey color.

Ancient paintings can be seen on the walls of the temple on the porch, and there are also images of ancient philosophers and sages, such as Aristotle, Ptolemy, Homer, Plutarch and others. Until the XVIII century, the Annunciation Cathedral served as the House Church of the Moscow sovereigns.

According to historical sources, the basement of the Annunciation Cathedral is the oldest building in modern Moscow. It is open to tourists and everyone interested in the informative exhibition “Treasures and antiquities of the Moscow Kremlin”. A fascinating sight is the architecture of the Annunciation Cathedral itself, which differs from other buildings in the architectural ensemble of the Cathedral square.

The South-Eastern porch is another landmark of the Cathedral. According to legend, it was built during the reign of John the 4th, on whom the Church imposed penance and forbade him to attend services in the temple. The reason for this persecution was the third marriage of John IV, who married Martha Sobakina, who died two weeks after the wedding ceremony. This porch was built so that he could at least listen to the services of his dead wife, instead of attending service inside.