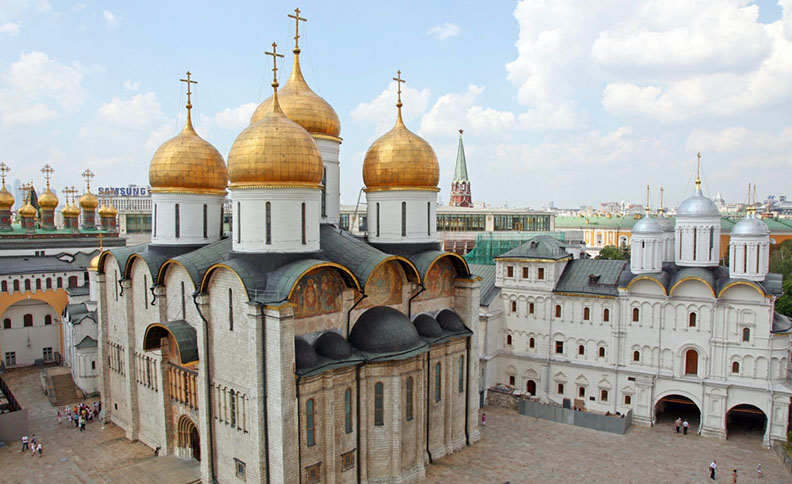 The Dormition (Assumption) Cathedral Moscow is an integral part of the architectural ensemble of the Moscow Kremlin. The temple is located in the heart of the Cathedral square in the Kremlin and is part of the state Museum-reserve. The date of Foundation is 1475-1479, and it was the assumption Cathedral that was considered the dominant Cathedral in Russia. Among other things, today the Cathedral is a tomb for all the patriarchs, with the exception of Nikon and Ignatius.

The Church was consecrated in 1327, but at that time it was a wooden structure, like all other elements of the Kremlin architecture of that time. The white-stone Church of the assumption of the blessed virgin Mary was founded in 1326 at the behest of the Metropolitan of Kiev and all Russia, who was called Peter. The staff of Saint Peter is still one of the main shrines that are kept in the Church.

The Cathedral was rebuilt many times depending on the wishes of representatives of a particular government. However, despite the fact that the painting of the temple was altered several times in history, you can see elements of fresco painting, which are fragments of the original painting.

Since 1955, the Assumption Cathedral was opened to everyone as a Museum. Since 1990, the Cathedral has periodically held services that are approved by the Patriarch personally. Among the shrines, you can also note the Nail of the Lord and the icon of our lady of Vladimir, which many tourists and pilgrims come to see in the assumption Cathedral.