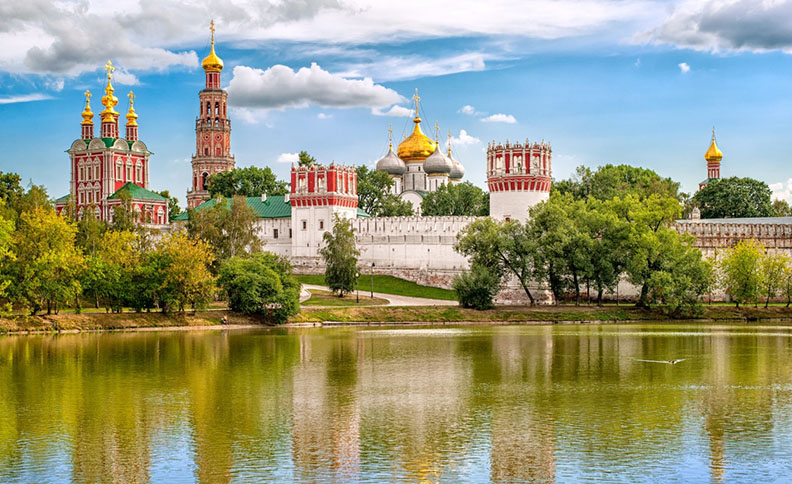 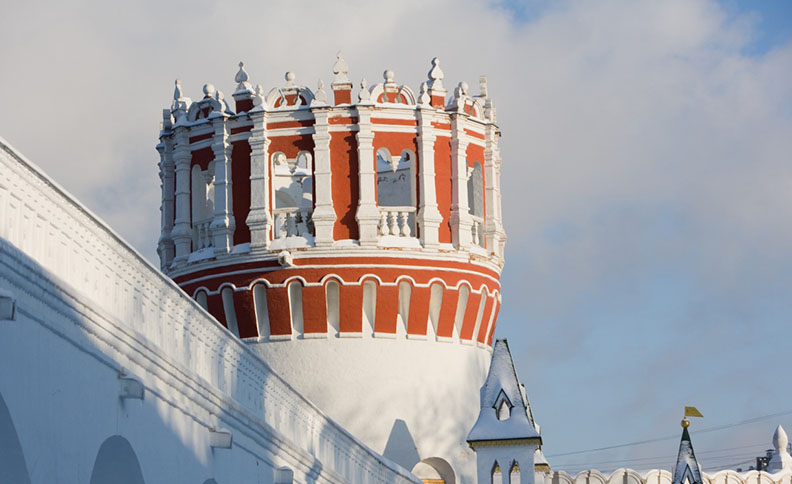 Novodevichy Convent (Monastary) Moscow– one of the most famous monasteries in Moscow was founded presumably in 1524. The purpose of visiting tourists is often not only the unique architecture of the monastery, but also the Novodevichy cemetery, where outstanding figures of science, culture, art, politics, military leaders, and war heroes are buried. Most of the tombstones were made by famous Russian sculptors – V.Mukhina, V.Klykov, E.Neizvestny, M.Anikushin, V.Vasnetsov, E.Vuchetich, S.Konenkov and many others.

The monastery itself is an architectural monument and a witness to many important historical events for the country. In pre-revolutionary Russia, its status among other monasteries was quite high, women from Royal and boyar families came here, which means that they donated jewelry and land to the monastery. So after the death of the last Rurikovich, the son of Ivan the terrible-Tsar Fyodor Ioannovich, his widow, tsarina Irina Godunova, retired here.

The history of the Royal family is also associated with the further flourishing of the monastery. In 1689, Peter I imprisoned his sister Sophia in Novodevichy, who was trying to seize power. It was kept in the corner Breast tower. On the inner side of the tower adjacent to the guardhouse, and on the outside you can often see people, especially women, touching the wall with their hands, it is believed that in this way you can achieve the fulfilment of cherished desires.

After the revolution in 1922, the monastery was abolished, it housed the “Museum of the emancipation of women”, which was later transformed into the historical, household and art Museum “Novodevichy monastery”. Now services are held in the churches of the monastery, and at the same time there are museums. The main Cathedral of the Novodevichy monastery is the Cathedral of the Smolensk icon of the mother of God.

The Cathedral Church, which immediately attracts attention, echoes its architecture with the Assumption Cathedral of the Kremlin. It is claimed that it was built by the Italian architect Aleviz Fryazin. This is not surprising, because the paintings were made by court painters who worked on the arrangement and decoration of the Kremlin buildings.

The similarity does not end there — it can be seen in the walls and towers of the monastery, although they were built later — at the end of the sixteenth century, during the reign of Boris Godunov, and the “carved” and lace-like completion of the tower received in the seventeenth century. Such serious walls with loopholes are not a simple borrowing of the Kremlin’s beauty, but a necessity of the time. As already mentioned, many monasteries served as watchtowers in Moscow.

If you look at the map of Moscow, you can see that the Novodevichy monastery and the Kremlin are connected almost in a straight line. Several streets, passing one into another, create a road that since 1658 was called Prechistenskaya — Russian tsars were sent to worship on it. And that’s the old name is preserved in the name of the street Prechistenka and Ostozhenka Prechistenskaya gate.